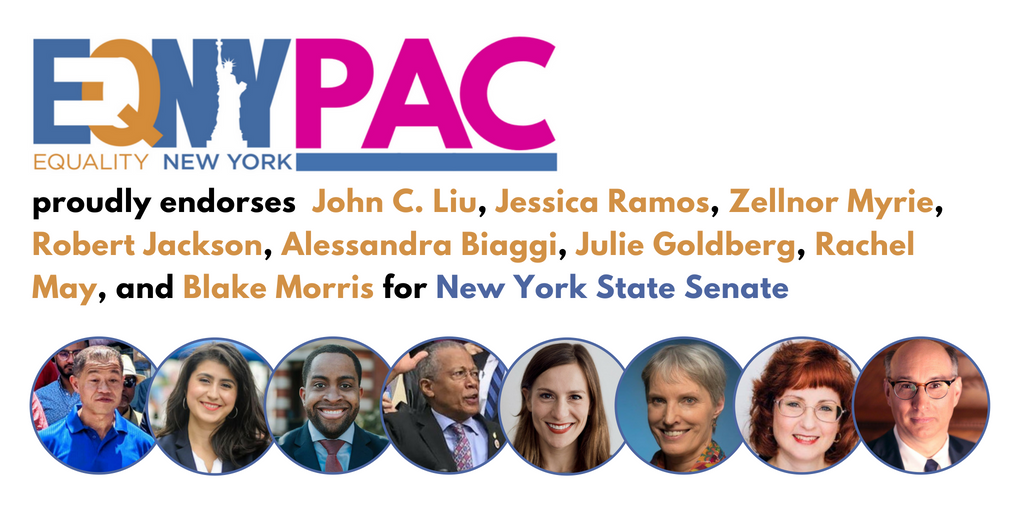 This is the PAC’s first round of State Senate endorsements in the 2018 election.

Since the 2016 elections, EQNY PAC has reviewed candidates for office and worked to support the election of political leaders who will fight for equality and justice for the diverse LGBTQI communities of New York State. LGBTQI New Yorkers are protected only by a patchwork of local and state laws and regulations. There remains a great deal of work to be done by the Legislature, including the codification of these regulations in statutes. We will work to elect these candidates because we believe they will champion our causes and pass the protections our communities need into law.

The Independent Democratic Conference (IDC) and Senator Felder in the State Senate have slowed and even halted the progress of equality and justice for LGBTQI people for too many years. With attacks on our Democracy coming from Washington, D.C., we cannot afford legislators who do not support the LGBTQI community in New York.

“We have seen bills, like GENDA and the ban on conversion therapy, stall in committee because there is no pressure to bring them to the Senate floor for a vote,” said Dylan Stein, Co-Chair of Equality New York PAC’s endorsement committee. “It is time to elect allies to state government who will represent the voices of the LGBTQI community in New York by passing needed safeguards for our lived and legal equality.”

John C. Liu, the candidate for Senate District 11, made the following statement: “For too long the State Senate has neglected to stand up for the needs of the LGBTQI community in any meaningful way. This was due, in large part, to a Republican majority, empowered by the Independent Democratic Conference. As the next State Senator in Queens SD-11, I will continue to champion the rights of this vital community, as I always have, as a true Democrat. I am honored by this endorsement. Thank you, Equality New York!”

“For too long, the State Senate has paid lip-service to the LGBTQI community, but failed to pass meaningful legislation. Because of the IDC and Senate Republicans, GENDA has sat in Albany for years without passage. In a state that started as the national leader of the LGBTQI movement, we should be easily passing legislation to protect and support the LGBTQI community,” said Jessica Ramos, the candidate for Senate District 13. “Equality New York plays a critical role in supporting LGBTQ New Yorkers and their families, from advocacy to education. I’m thrilled to have Equality New York’s endorsement, and excited to be a true partner in Albany for LGBTQI New Yorkers.”

Robert Jackson, the candidate for Senate District 31, replied to Equality New York PAC’s endorsement: “I want to thank Equality New York for their support and for the work they do every day fighting to advance equality and justice for LGBTQI New Yorkers and their families. Unfortunately, at a time when the LGBTQI community is under attack from Washington, so much of what needs to be done here in New York dies in the State Senate because our State Senator [Marisol Alcantara] and the IDC empowered Republicans to be in control. It’s an outrage that the State Senate has not acted on a single piece of LGBTQI legislation in the last six years. I look forward to working with Equality New York to change Albany, create a New York that works for all of us, and is the progressive leader it should and must be.”

“There is still way too much work left to be done to achieve full equality for the LGBTQI community in New York,” said Alessandra Biaggi, the candidate for Senate District 34. “I am proud to be endorsed by Equality New York, a leader in representing and fighting throughout the state for the interests of the LGBTQI community and I look forward to being a partner in the fight.”

“Equality New York plays a vital role in securing and protecting equal rights for all LGBTQI New Yorkers,” said Julie Goldberg, the candidate for New York’s Senate District 38,“and I am proud and happy to have their support.”

“New York has to lead the way on LGBTQI rights,” said Rachel May, the candidate for Senate District 53. “With a hostile administration in Washington, D.C. threatening to roll back so many gains, it is more important than ever that we stand strong and change our laws to permanently enshrine basic civil rights. New York’s laws still do not prohibit gender identity discrimination or conversion therapy. LGBTQI people are disproportionately affected by a range of issues, including poverty, housing instability, and violence. I am proud to stand with Equality NY and look forward to working with them as an ally in the State Senate.”

We are proud that these eight candidates have engaged with our communities to understand and plan for supporting the solutions necessary for the equality and justice of LGBTQI New Yorkers. We are every gender, every race, every religion, and every economic experience. We are immigrants, asylum seekers, lifelong citizens. As a community that faces discrimination and violence because of who we are, including our gender identities and sexual orientation, we bring together the experiences, challenges, and gifts of diversity in all of its meanings.

Through these endorsements and support throughout the election cycle, EQNY PAC will continue to work for a state in which all of us and our families are safe and supported in all corners of New York.